Where is the Karoo in South Africa?

Many different explanations will be given – it is different for everyone. The quietness, the locals, the dust roads, the lonely rusted windmill, the scenery (sometimes semi-desert), the sunsets and sunrises, the donkey carts, the…whatever….it is all there, it soothes your heart and makes you feel at peace. On this website Louise and I will be posting info on places we’ve been to. Some of them we have visited multiple times. There is also a facility for you to upload information (English or Afrikaans) and 3 images of your favourite place. Once approved, I will post it in the relevant section with your name in the credits.

Where does the Karoo Start?

The Karoo, from a Khoikhoi word, possibly garo “desert” is a semi-desert natural region of South Africa. There is no exact definition of what constitutes the Karoo, and therefore its extent is also not precisely defined.

What province is the Karoo in? 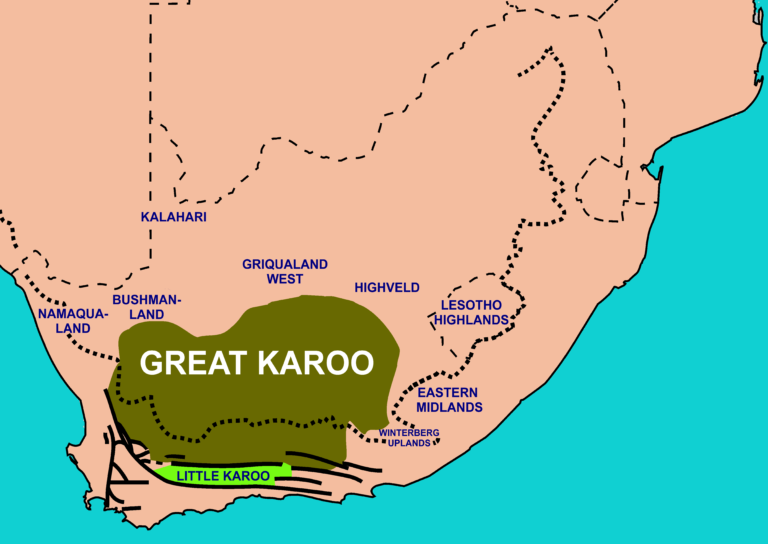 The Karoo is best defined by its vegetation, which consists of assorted succulents and low scrub bushes spaced from one foot to several feet apart.

The Karoo is sharply divided into the Great Karoo and the Little Karoo by the Swartberg Mountain Range, which runs east-west, parallel to the southern coastline, but is separated from the sea by another east-west range called the Outeniqua –Langeberg Mountains.

The Great Karoo lies to the north of the Swartberg range; the Little Karoo is to the south of it.

The Great Karoo straddles the 30° S parallel on the west of the continent, in a similar position to other semi-desert areas on earth, north and south of the equator. It is furthermore in the rainfall shadow of the Cape Fold Mountains along the western coastline. The western “Lower Karoo” (the Tankwa Karoo and Moordenaarskaroo) contain remnants of the Cape Fold Mountains (e.g. the Witteberg and Anysberg Mountains) which give it a moderate hilly appearance; but further east the Lower Karoo becomes a monotonously flat plain. The “Upper Karoo” has been intruded by dolerite sills, creating multiple flat topped hills, or “Karoo Koppies”, which are iconic of the Great Karoo.

The vegetation of the Upper and Lower Karoo is similar, so that few people make a distinction between the two.

The main highway (the N1) and railway line from Cape Town to the north enter the “Lower Karoo” from the Hex River Valley just before Touws River and follow a course about 50 km south of the Great Escarpment up to Beaufort West. Thereafter they gradually ascend the Great Escarpment along a broad valley to Three Sisters on the Central Plateau and the “Upper Karoo”.

Turning north from the N1 between Touws River and Beaufort West, at Matjiesfontein the road ascends the Great Escarpment through the “Verlatenkloof Pass” to reach Sutherland, at 1456 m above sea level, which is reputedly the coldest town in South Africa with average minimum temperatures of -6.1 °C during winter. Parts of eastern the Mpumalangan Highveld do at times experience lower temperatures than Sutherland, but not as consistently as Sutherland does. Snowfalls are not infrequent during the southern winter months. The South African Astronomical Observatory has an emplacement of telescopes about 20 km east of the town, on a small plateau 1798 m above sea level, and is home to the Southern African Large Telescope (SALT), the largest optical telescope in the Southern Hemisphere. To the north, still on the Plateau, and 75 km north-west of Carnarvon seven radio dishes form part of the Square Kilometer Array which will, 2500 in total, be scattered in other parts of South Africa and Australia, to survey the southern skies at radio frequencies. Our Galaxy, the Milky Way, one of the main targets of this enterprise, is best viewed from the Southern Hemisphere. The Upper Karoo is indeed an ideal site for an astronomical observatory. This is not only because of the clear skies, absence of artificial lights, and high altitude, but it is also tectonically completely inactive, meaning that there are no nearby fault lines or volcanoes, and therefore experiences no earth tremors or earthquakes even at great distances.

The Little Karoo is separated from the Great Karoo by the Swartberg Mountain range. Geographically, it is a 290 km long valley, only 40–60 km wide, formed by two parallel Cape Fold Mountain ranges, the Swartberg to the north, and the continuous Langeberg-Outeniqua range to the south. The northern strip of the valley, within 10–20 km from the foot of the Swartberg mountains is most un-karoo-like, in that it is a well watered area both from the rain, and the many streams that cascade down the mountain, or through narrow defiles in the Swartberg from the Great Karoo. The main towns of the region are situated along this northern strip of the Little Karoo: Montagu, Barrydale, Ladismith, Calitzdorp, Oudtshoorn and De Rust, as well as such well-known mission stations such as Zoar, Amalienstein, and Dysselsdorp. karoo farm stay, nieu-bethesda, graaff-reinet, prince albert, waterval farm, allendale guest farm, doornberg farm

Farmlands along the well-watered, fertile foothills of the more than 2000 m high Swartberg Mountains (in the background) along the northern strip of the Little Karoo.
The southern 30–50 km wide strip, north of the Langeberg range is as arid as the western Lower Karoo, except in the east, where the Langeberg range (arbitrarily) starts to be called the Outeniqua Mountains.

The Little Karoo can only be accessed by road through the narrow defiles cut through the surrounding Cape Fold Mountains by ancient, but still flowing rivers. A few roads traverse the mountains over passes, the most famous and impressive of which is the Swartberg Pass between Oudtshoorn in the Little Karoo and Prince Albert on the other side of the Swartberg mountains in the Great Karoo. There is also the main road between Oudtshoorn and George, on the coastal plain, that crosses the mountains to the south via the Outeniqua Pass. The only exit from the Little Karoo that does not involve crossing a mountain range is through the 150 km long, narrow Langkloof valley between Uniondale and Humansdorp, near Plettenberg Bay.